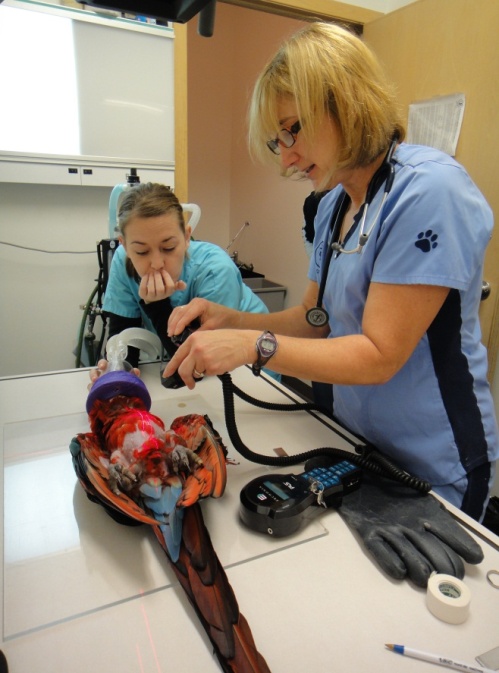 Dr. Janet Gordon Palm is a practicing integrative medicine veterinarian who is continually reinventing herself as she learns of new non-invasive modalities to forward healing. Graduating from Kansas State University in 1981, Dr. Janet practiced medicine and surgery in small animal, avian and exotics, initially in California, then Minnesota, before relocating to the veritable playground known as the Western Slope of Colorado. Originally trained in conventional medicine, she naturally evolved to include complementary modalities such as neuronal adjustment, osteopathy, cranial sacral, acupressure, myofascial release, and LLLT.

She is actively involved in Natural Horsemanship and includes the concepts of recognizing and managing emotional states in horses through universal body language to all species. In 2010, she started her ambulatory practice "Animobility Integrative Veterinary Services".

An avid horseback rider, mountain biker, and hiker, she resides with her fellow adventure-loving dirt-bike riding husband Ron, in Fruita CO with two cats "Tesla" and "Puma", as well as her Arabian gelding “ To’hi ".

My personal goal is to provide an outstanding quality of life to people and animals, and that people express their passion in living life outrageously. Professionally, I seek to accomplish my personal goal using the tools I have accumulated through my educational studies, practice, and life experiences.

New Hope Animal Hospital – 1987-2016; New Hope, Minnesota Progressive small animal and exotic practice owned by Randall Herman, D.V.M. Computerized and paperless practice includes Idexx in house and send out capabilities, ultrasound, digital radiology, digital dental radiology and ultrasonic scaler, Ellman electrosurgical unit, and Endoscopy. I encouraged owner to invest in new modalities of Veterinary Orthopedic Manipulation and Cold Laser therapy. (Erchonia Base Station - Frequency Specific Low Level Laser) I was in charge of integrating these technologies into the practice. I Became senior veterinarian performing diagnostics, treatments, surgery, training of support staff, client education, as well as comedic relief in the form of original songs/skits at staff functions. I inspired the clinic to stop declawing cats in 2015 and the clinic enjoyed a large influx of clients as a result of this compassionate stand.

Western Hills Veterinary Hospital – Topeka, Kansas; May 1974 to August 1980 ; As a Prevet student, I volunteered and eventually was able to be paid 1.00/hour to assist in veterinary duties ranging from kennel assistance, receptionist activities, to technician responsibilities ( fecal flotation, restraint, blood draws ). Between junior and senior year of Vet school, was able to perform spay and neuter surgeries to clients at a reduced rate, under supervision by Larry Fischer, DVM.

Director of The Paw Project, Western Slope Colorado currently (Minnesota 2013 - 2016) I was able to influence the AHAA practice I had been working at (NHAH) to stop declawing and client acceptance was dramatic with more clients transferring to us as a result.

Licensed to Practice in Colorado; Utah; California; Minnesota; and Kansas

Outdoor activities such as horseback riding, Natural Horsemanship; as well as mountain biking; rollerblading; running; rock climbing and hiking with my husband Ron

Fitness activities such as aerobics, dancing, core work. I developed my own aerobic workout I call  “Curbhop-Dancing", a mix of dance, step aerobics and running.

Art, drawing, painting, cartooning; I have illustrated logos, medical articles, as well as a book on Equine Colic.